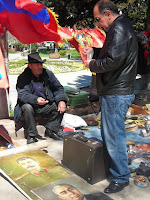 Two years after its five-day’s war with Russia little has changed in Georgia. The postcards evoking Russian military threats sold in the small souvenir shops in Tbilisi’s old town are just one sign of the lingering presence of the 2008 conflict over the secessionist republics of Abkhazia and South Ossetia. There is a similar mark on the minds of the people: they are still living a post-war experience. ”Fear of Russia” rhetoric poisons every political discussion and it’s a card President Mikheil Saakashvili plays constantly, in both internal and external politics, even if the European Union insists that Georgia’s relationship with the EU will never be a matter of choosing between Brussels and Moscow. Tanks remain silent, but the Russo-Georgian propaganda war is still going on. (...)

Publicat per Carme Colomina Saló a 12:51
Envia per correu electrònicBlogThis!Comparteix a TwitterComparteix a FacebookComparteix a Pinterest
Etiquetes de comentaris: Geòrgia