European divisions: The EU once more without answers 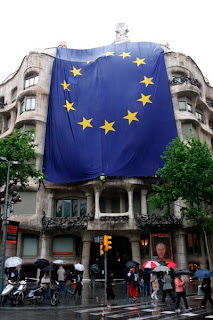 Treaties are no more than legal documents at the service of the European Union. A fundamental question is ‘what kind of Europe do we want?’ However, the EU has been unable to come up with a unanimous answer. Ireland’s ‘no’ to the Lisbon Treaty has reopened divisions among those that support economic union and those that aspire to more political integration. In this global threat to the economy and with Russia playing tough at the Union's borders, what EU needs is not only a new legal framework but a real political leadership.

After Ireland’s ‘no’ to the Lisbon Treaty, the EU has been split in two. For some it is a chasm that divides European citizens from the political class. The EU, built from the top down as the result of political agreements in the distribution of influences, has to find a way to make the democratic process more transparent before the next round of European elections in June 2009. For others the European project has broken with its original objectives for the lack of a clear answer to the most basic question: what Europe do we want?

The eternal dilemma, unsolved by the current economic and political union, has returned once more to threaten its immediate future. A Europe that is more politically integrated not only frightens some of its citizens, but also most of its leaders. The veteran of all heads of European governments, Jean-Claude Juncker of Luxembourg, admitted recently that ‘between globalisation and the nation, there is an organised Europe’, but ‘we continue to act before public opinion as if our national government was the only one able to provide answers to our most immediate problems’. Fifty years of a common project have still not changed the inertia of blaming Brussels for the difficult decisions that must be applied at state level. It is as if ‘Brussels’ was an entity in itself when, in reality, it is a European Commission, whose members have been assigned by each of the Member States and approved by the European Parliament, and a Council of Ministers in which the 27 EU governments participate. (.....)


The shock brought about by the Irish ‘no’ and the new uncertainties in the process of ratification of the Lisbon Treaty have further weakened the already fragile European project. The European Commission’s capacity to initiate new legislation has been reduced to a minimum, unable to act in order to avoid any mistake. A mistake that might slow down a ‘yes’ to the Treaty or that may also affect the political career of its members just one year away from the renewal of Brussels’ executive. The poor leadership shown by this Commission has been the perfect excuse for those that defend the view, as the Council of Ministers would have us believe, that ‘the strict community processes, those of directives and an interior market, are practically finished, and that from now on it is much better to function with an intergovernmental mechanism’. This is because, as Nicolas Sarkozy argues, ‘there is life beyond the institutions’. The euro and Schengen are two great instances of cooperation between states that are held up as examples. If this view prevails, an EU made to suit its states would consolidate itself, to the detriment of institutions that were meant to guarantee the democratic participation of its citizens. (....)


Institutional weakness is translated into impotence on an international scale. Only the European Union initiative, under the leadership of Nicolas Sarkozy, to come with a cease-fire on the Russian-Georgian conflict gave some breath to a common foreign policy, even if negotiations where extremely careful not to damage strategic bilateral relations between the Kremlin and Germany, Italy or France. Beyond that, the EU appears trapped by its own Eurocentrism without realising that, little by little, it is losing its ability to face the new global arena. This Union of some 500 million inhabitants represents just 4% of the world’s landmass and around 10% of its population. By 2025, China will be the second largest global trading nation and India will occupy the fourth position, just behind the EU. Asia is imposing new forms of capitalism which reject Western values. China and India are putting into practice new foreign policies in Africa and Latin America. Russia has unveiled its new leadership under Dimitri Medvedev and the long shadow of Vladimir Puttin. The United States will do so from next November with Barack Obama or John McCain. Meanwhile, the EU continues to be stuck with the impossible reforms of its institutions. The disproportion of the situation is evident. Europe’s presence in the world is waning. The EU does not exist as a political entity on the UN’s Security Council, for example, or in the International Monetary Fund, because the European states of which they are formed want it that way. Among so much limitation it is not possible for the EU to be a credible actor in foreign policy. Without the Lisbon Treaty brought into force the European Union remains, for the time being, without a strong foreign policy, without the legal personality that would allow it to sign international treaties and unable to open doors to the new states born from the disintegration of the former Yugoslavia. The EU has for too long been offering the carrot of membership to the Balkans, while the reality has continued to erode its credibility in the region. The Union lacks a permanent president (one that does not rotate every six months) to represent it to the world. In a shocking prove of realism, a leading member of the Ministers Council confess not long a ago to a group of experts that “we will never have a common voice in the world, our highest ambition should be to get a well trained choir”.

Ireland’s ‘no’ is not an isolated case. It is the same ‘no’ as France and Holland gave to the European Constitution. It is a ‘no’ that mixes an absence of knowledge, false arguments, dissatisfaction with the current national government and above all else a lack of confidence in the EU. The citizens, who in surveys define themselves as clearly pro-European, respond with a ‘no’ to changes that would reinforce Europe. Governments are too scare to suggest any consultation that could end with new arguments against their own taken decisions. The lack of confidence is mutual. (....)


In the following months there is important work to be done, not only to explain once again the European project, but also to really listen to what the citizens want from the EU. Over the years we have all learnt to view and value the EU with less passion and more pragmatism, but if this distancing and abstentionism by the citizenry is not dealt with, this sense of rejection will end up being a problem of political legitimacy. Dissatisfaction on behalf of the citizens towards the political class in general is exacerbated where Europe is concerned. The day-to-day work of the institutions have served to enhance this perception. The image we receive from the media is of a Europe that is undermining its own democratic demands: the controversial debate about immigration; the investigation into the CIA’s secret flights in EU territory; the reduction of liberties as a result of the fight against terrorism; arbitrary measures such as the inspection of liquids and airport security checks; or the surrender of personal information of all European passengers that fly to the United States. Such measures are interpreted as a challenge to the social European model, till now considered one of the key values of the European project. In reality, social Europe has always been the lowest common denominator of a union that, since its enlargement in 2004, has become ‘Britanised’ to coin a phrase. The new French president of the EU spoke on the ‘need to reconciliate European citizens with Europe’. However, the key questions are, ‘with which Europe?’ Followed by, ‘to what end?’ No one doubts that without the support of its citizens it will be impossible to continue to an ever-closer union. For those that want it, this much is clear. Reality has a habit of reminding us that we do not all want the same thing for this Union.
*fotografia de la representació de la Comissió Europea a Barcelona. Acte de celebració del 9 de maig del 2008.
Publicat per Carme Colomina Saló a 11:45
Envia per correu electrònicBlogThis!Comparteix a TwitterComparteix a FacebookComparteix a Pinterest
Etiquetes de comentaris: Tractat de Lisboa, UE

To the point! But don't miss to vote online about the EU.

Vote YES or NO to Free Europe Constitution at www.FreeEurope.info